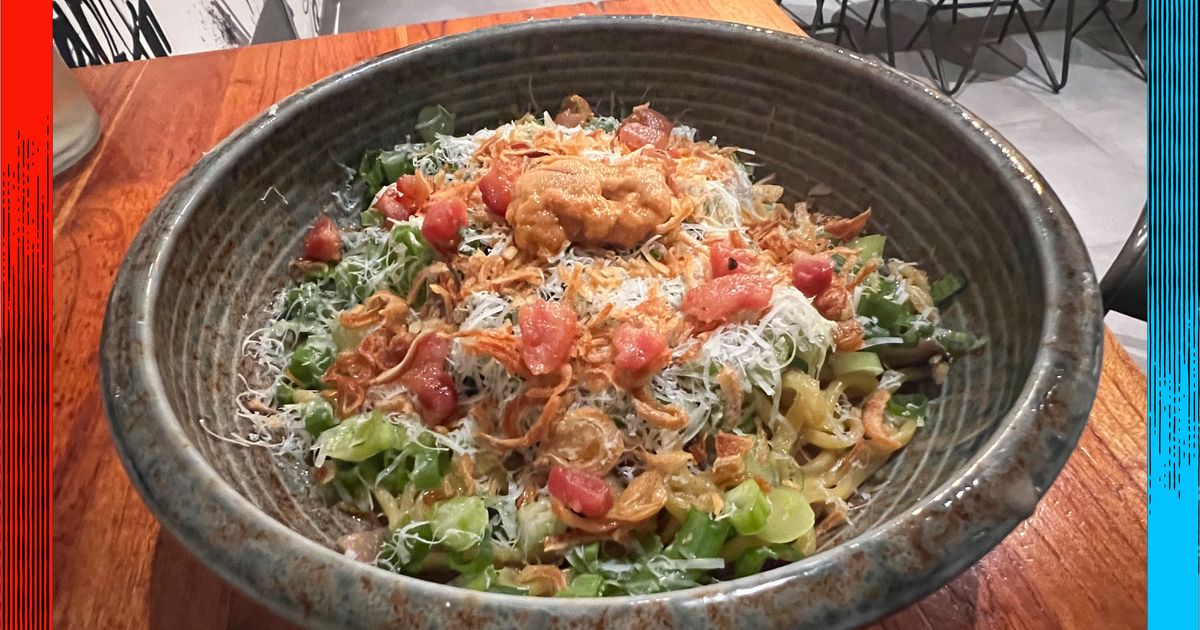 This article originally appeared in The year I ate in New York, a newsletter about eating across the city, one restaurant at a time. register here.

Last week, when I saw omakase restaurant Icca posted their new “Japanese/Italian” menu on Instagram, I decided to head to Tribeca for a whimsical fusion. Although the full sushi menu is served in a different room, I was able to benefit from a zen atmosphere, minimalist decor and attentive service. The high-back seats are really comfortable, which is important when sharing two pastas and two risottos with a friend.

We started with a bottle of dry sake chosen by the chef and served in small engraved tumblers – I love the fancy glassware – which the staff topped up as often as needed. While I noticed a handful of diners ordering the abbreviated omakase menu prepared by a sushi chef at the other end of the bar, my friend and I ate spaghetti bolognese al dente (which tasted the best corned beef stew in the best possible way), followed by penne with spicy bluefin tuna stew, alongside two risottos – one stained with squid ink and the other with abalone liver. What struck us most about the rice was how each grain managed to stand out. Any Nonna would have been proud.

At the end of our meal the chef came out and I asked if he had ever cooked in Italy. “He loves Italian food,” translated our waiter. “Its style is very Japanese – like the broth” used to cook the risotto, which we learned was made with Japanese sushi rice, not the traditional Arborio, perhaps contributing to its exceptional texture.

I first learned about Japan’s deep appreciation for Italian cuisine by watching reruns of the original iron boss. Even now, years later, the combination makes perfect sense. Both cuisines share a dedication to regional ingredients and a mutual respect for seafood, noodles and rice. Word itameshi is both Japanese for “Italian cuisine” and used to describe Japanese-Italian fusion cuisine.

I decided to explore a more creative side of itameshi at Kimika, where my seat was directly across the street from The Butcher’s Daughter. I had been optimistic, but this time the combinations seemed more forced. A starter of raw scallops with hot chili oil could have been served at any vaguely Asian restaurant, and the “fried pizzette” was more like prosciutto on a greasy scallion pancake. You could do better than the three arancini in a curry pool for $26 at any number of Japanese cafes in the area for about half the price, and an eggplant katsu entree was nothing more than a slice of panko-crusted nightshade with a dip. (However, the cocktails were really good.)

This time I had a Japanese friend with me who told me she had been meaning to try this place for a while when I invited her. We both agreed that the food didn’t seem particularly Japanese Where Italian, but maybe it was lackluster execution. The meal at Icca had been a cohesive fusion of Japanese ingredients and Italian dishes, while Kimika’s food seemed fused together. “This place is a neighborhood casualty,” my friend said, pointing to the streets of Nolita outside.

When I asked her if she had ever seen Italian-Japanese restaurants growing up in New York, she immediately mentioned Basta Pasta, which serves tobiko and spaghetti uni among other things, more downright Italian recipes like bagna cauda and tagliatelle with ragu. She recalled visiting the Flatiron site when she was a child, and I was surprised to learn that it’s not only still around, but apparently thriving. (When I tried to go on Sunday it was closed for a private event.)

Unfazed, I instead headed to Jun-Men, a ramen bar in Chelsea, for uni mushroom mazes. Amid the crowds of rainy night dinners, I swirled fluffy ramen noodles with chunks of porcini mushrooms, crunchy pieces of pancetta and fried shallots, scallions, and a piece of chilled uni.

I asked my server about the influence for the dish. “Carbonara, perhaps? she answered. “I know the owner was a chef at another Asian restaurant – maybe there?” Obviously, the origins of the Japanese-Italian merger were not a priority for the clientele, since I was the first person to ask. I’ll take that as proof that the dish works well – people don’t even think to question it.

The year I ate in New York

By submitting your email, you agree to our Terms of Use and Privacy Notice and consent to receive email correspondence from us.