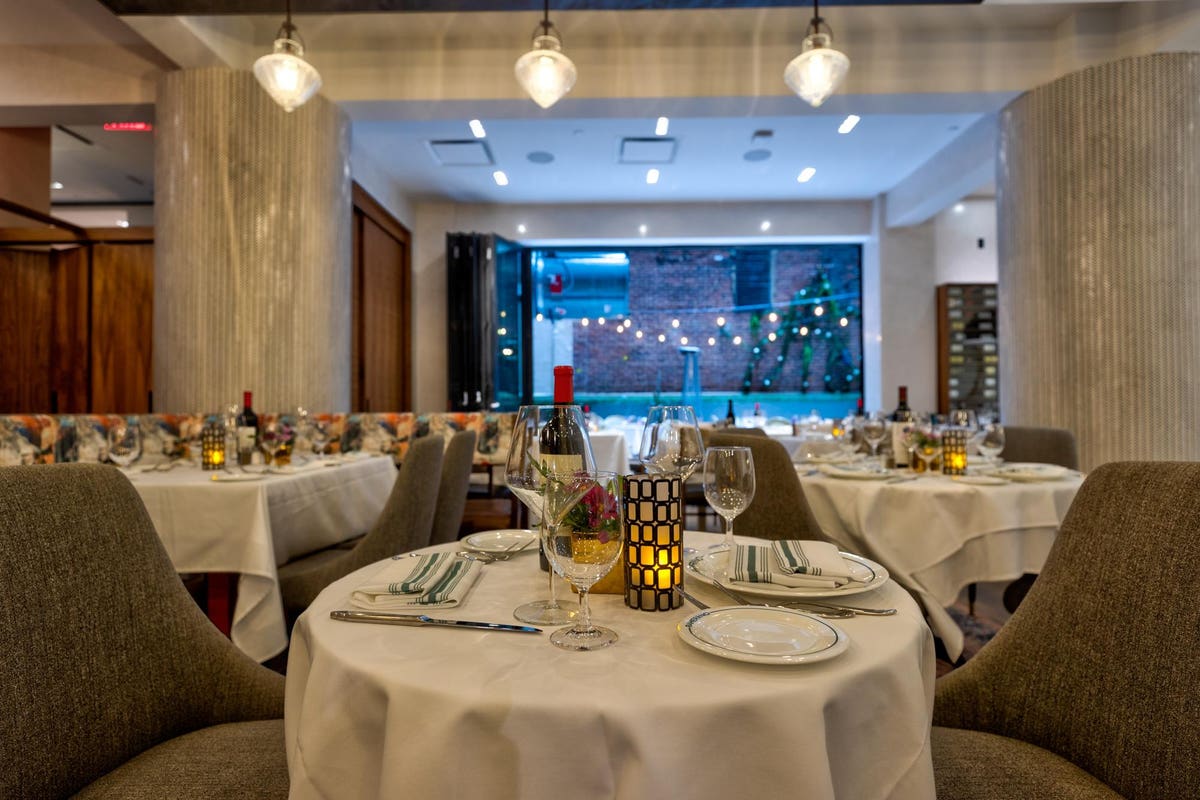 The fallacious complaint during the pandemic among some food media was that no one in their right mind would dare to reopen a closed restaurant or attempt a new one, even after the fever subsided. Still. dozens of restaurants continue to open every month in every borough and, clearly, Sammy V. Gashi was one of those who didn’t get the negative message. He already runs San Marino Soho and Antica Ristorante on Stone Street and, with his brother, another in Queens.

Even at the best of times, opening a restaurant in midtown Manhattan, especially one as fine as Ramerino Italian Prime, would seem like a high risk, yet after 25 years,

he turned out to be another of those Albanian immigrants for whom America was truly a land of opportunity.

By simply copying his other hits, Gashi might have taken advantage of a proven concept, but Ramerino is nothing like his other establishments and,

while all serve traditional Italian dishes, they also differ, with the Ramerino (Tuscan for rosemary) putting more emphasis on its beef selections. Executive chef Vilfredo Hodai, a Tuscan who worked at La Giostra in Florence, known for its bisteccaadds many of its own touches to a traditional menu.

Ramerino is a very beautiful dining room, softly lit but not at all dark, with ridged pillars, polished wooden walls, very comfortable plush velvet armchairs, fine linens and candles on the table. The silverware has weight, the wine glasses, of different sizes, finesse. The well-dressed service staff couldn’t be more cordial, which is a hallmark of Albanian-owned restaurants in New York.

On the night we visited there were unfortunate long gaps between courses – our meal lasted three hours – but I’m sure if you tell them you want to finish in two hours they’ll be happy to accommodate you . The wine list is rich with good Italian bottlings at the usual margins and most of the reds are skilfully decanted.

The generous spirit begins with a free plate of three loaves, with pieces of Parmigiano aged 36 months and soppressata sausage. There are 15 antipasti and four salads ($15-$16).

I pretty much left it to Gashi to choose our menu for a table of four,

and we started with delicious well-seasoned artichoke hearts with creamy avocado ($18) and perfectly grilled octopus with a lovely mashed chickpea, lemon and olive oil ($25) . Best of all was a succulent dish of sliced ​​eggplant smothered in tomatoes, parmesan and basil ($18). Unimpressive was the cauliflower with a bland béchamel and parmigiano ($18). All of this is easily shareable.

Ten pastas are listed, all on warmed plates, including a well-textured risotto made with Canaroli rice, tender asparagus, zucchini and a touch of golden saffron ($26). In a town consumed with Roman cacio and pepe, Ramerino’s stands out, starting with the fatty tonnarelli, strong pecorino romano, black pepper and grated parmigiano ($26). The richest and most daring of all is the homemade papardel with porcini mushrooms, truffle oil and goat cheese ($29). The most unusual was the linguine with bottarga ($29) – pasta topped with dried mullet roe – not because you won’t find it elsewhere, but because it’s usually not the main ingredient. Here you get a lot of bottarganot too salty, not too intense but wonderfully brackish.

The plump, well-shaped and cooked potato pesto gnocchi ($26) could have used the basil flavor and color of a more intense summer, but it was good of its kind.

I haven’t tried the 36 oz. bistecca for two, who would have served three or four ($129), opting instead for a thick, savory filet mignon in a much-reduced red wine sauce ($48), which itself served two. The veal cutlets came with wild mushrooms and a demi-glace of ideal viscosity and richness ($36), while the chicken was wrapped in goat cheese, with zucchini, Brussels sprouts and carrots ($32). I love Dover Sole (MP) and Ramerino’s is one of the best, juiciest and firmest I’ve had in a while, expertly deboned.

hare at least one dessert [prices TK]: plump cannoli freshly filled with pastry cream; a tiramisu; and a lemon cheesecake.

Ramerino is a stone’s throw from the New York Public Library on Fifth Avenue, but 39th Street is quiet and inside you’ll be treated to grace without the hustle and bustle of downtown trattorias. Ramerino is a real respite from six, and if you opt for a ribeye or a bistecca alla Fiorentina, it’ll be a cozier experience here than at the noisy steakhouses nearby.

Open Monday through Friday. for the lunch; Mon.-Sat. For dinner.