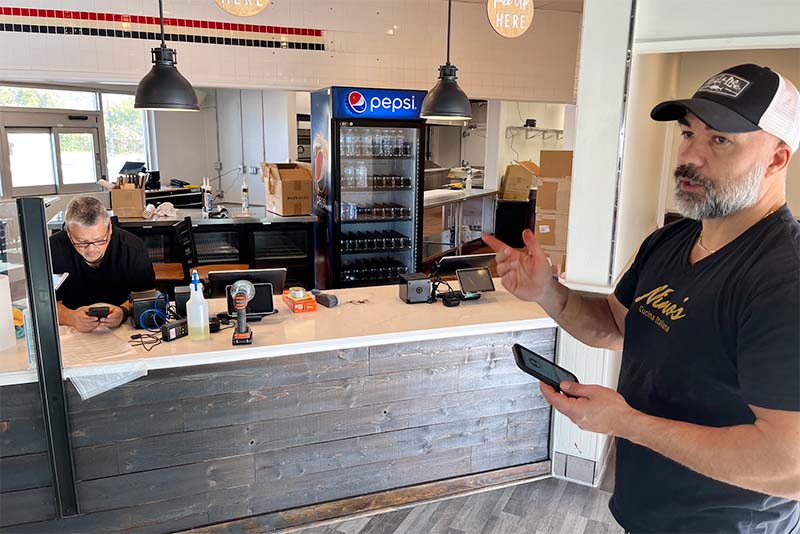 The interior has been ready for some time, but there were other hurdles to overcome, including getting the necessary permits, Mannino said.

He and Marabella manager Jim Muse were at the restaurant on Monday working on a list of pre-opening items, such as supplying the restaurant. Mannino spoke about what will make Marabella unique in an area that has its fair share of pizzerias.

Keeping it simple is central to Marabella’s success, according to Mannino.

“It’s like pizza, sandwiches, pasta in a minimal way,” he said in an Italian accent that can’t help but add to Marabella’s claim of authenticity. “That’s where we come from. Marabella is simple Italian food – pasta, lasagna, spaghetti and meatballs, old fashioned pizza, made with fresh mozzarella,” he said, adding that the mozzarella is always made on sight.

After both moving from New York to North Carolina, Mannino and his business partner, Sal Passalacqua, opened the first Marabella in Greenville. Passalacqua’s father had emigrated from Italy in the 1970s and worked in a delicatessen in New York’s Little Italy before opening a pizzeria in Brooklyn.

In addition to the classic Margherita (fresh mozzarella, tomato and basil sauce), old-fashioned pies include Mondello (fresh mozzarella, arugula and prosciutto), Romana (capers, anchovies and olives) and Toscana (roasted peppers, salami and olives), among others. With, of course, sandwiches and pasta available for customers looking for an alternative to pizza.

“It’s a simple product, but we put so much heart into it,” Mannino said. “We care about what we do.”

“It’s real Italian food,” Muse said. “These guys have been doing it forever; it’s three generations of this family. Wilmington is going to have fun.