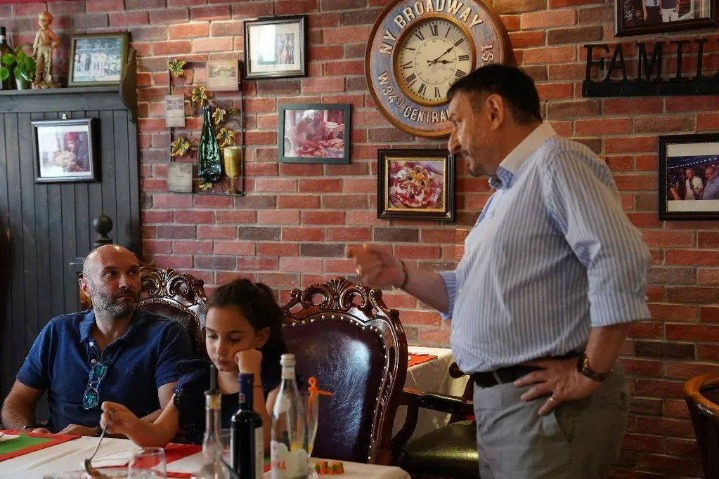 Located in the heart of Tianjin in northern China, Renato Pegoraro’s family restaurant bustled with diners as the sun went down and the city lights came on.

Pegoraro’s, which opened in 2007, is well known for serving authentic Italian cuisine prepared with ingredients mostly imported directly from Italy. The restaurant’s popularity with locals and tourists alike is bolstered by its location in the historic Italian-style area of ​​the port city’s Hebei district.

Despite the temporary COVID-19-induced closures over the past two years, the restaurant is doing well and has stocked enough liquor, cheese and meat to address potential logistical issues.

Pegoraro’s has been through the tough times with other local businesses in the area with the help of the local government.

“Thanks to the rent exemption policy, I have been able to focus on developing new dishes because I don’t have to worry about operating costs,” says Pegoraro.

The 73-year-old Italian entrepreneur moved to Tianjin in 2004 to venture into international business. As a history buff, he immediately fell in love with the Haihe Riverside area designed by an Italian architect over a century ago.

The 28-hectare neighborhood features European-style buildings all along its streets, including a public square with an iconic bell tower in the middle. Some early 20th century Chinese celebrities also lived there.

“This neighborhood is so Italy. It feels like my hometown,” Pegoraro says, elaborating on the driving force behind the creation of his Tianjin restaurant.

The municipal government of Tianjin has worked hard in recent years to transform the area into a commercial hub with unique exotic charm and a center of high-end service industries, making Tianjin City the home of more than 13 million people, even more dynamic.

“Based on the cultural characteristics and strong commercial presence here, we will make the area more attractive to younger generations and roll out policies conducive to start-up incubation,” said Xu Gang, district Party secretary. Hebei from Tianjin.

Infrastructure and public services in the area have been improved, creating more open spaces to walk around and beautifying the place with greenery and flowers.

Businesses like the one in Pegoraro are booming. Many young people flock to the New Cinema Paradiso themed restaurant to enjoy Italian wine while watching classic Italian films.

“We hold events like a China-Italian culture week and exhibitions showcasing Italian products and fashion to attract more customers,” said restaurant manager Li Bin, adding that reservations have increased as the epidemic is diminishing.

In cooperation with the Italian Embassy in China and the Tianjin Film Studio, the management committee of the Italian style zone is considering the introduction of higher-end cultural projects, according to Liu Zongjin, director of the committee.

For example, former celebrity residences have been restored for tourism. A famous bookstore chain popular on social media will soon open an outlet in the area, Liu said.

In July, the area was listed as a national hotspot for night culture and tourism consumption by China’s Ministry of Culture and Tourism.

The news delighted Pegoraro and his son Gabriele, who also manages the restaurant, as they are both convinced that the city and this region are ready to develop.

The restaurant has also launched its official page on the WeChat messaging app where information about Italian wine and food culture can be found.

“I consider Tianjin my second home, and I will do my best to make this century-old block a more charming place,” Pegoraro said.