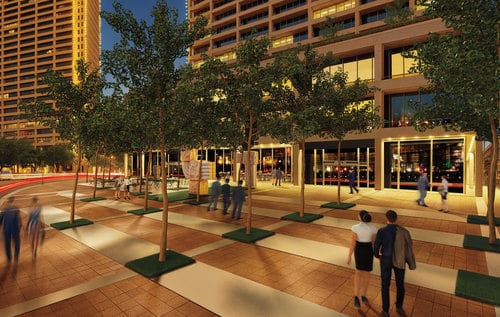 A longtime Fort Worth restaurateur has plans for a new restaurant with an emphasis on Italian cuisine.

61 Osteria, on the ground floor of the recently renovated 21-storey First on 7e complex, will be operated by Adam Jones, a 30-year veteran of the Fort Worth restaurant scene, who since 2008 has owned the famous Grace Restaurant on Main Street. He also owns Little Red Wasp, another popular downtown bistro, and is the former general manager of Del Frisco’s Double Eagle Steakhouse.

The new restaurant will combine an airy, modernist vibe with a menu from award-winning chef Blaine Staniford, who served 13 years as executive chef at Grace, as well as eight years at Little Red Wasp, according to a press release.

The new restaurant will be located on the ground floor of a famous mid-century modern high-rise in downtown Fort Worth. 20e-th century master.

â€œThe location of 61 Osteria is very cosmopolitan – the grounds, the sculptures, the mid-century look, the huge patio, all the glass,â€ said Jones, who has been eyeing the space for years and has even bought a house across the street at Condos Neil P .. 61 Osteria plans to open in mid-2022

With floor-to-ceiling windows covering its western and southern walls and offering sweeping views of the cityscape, 61 Osteria will serve as a new culinary destination for the western end of the central business district. Dishes will emphasize grains, flour and fresh local produce from Texas farms and mills, in a classic Italian style of three to four ingredients. Among the restaurant’s features are a wood-burning fireplace, rotisserie and pasta room.

The name 61 Osteria is a nod to 1961, the year in which the First of 7e building (originally First National Bank) has been completed. Osteria means tavern in Italian.

The south side of the restaurant overlooks the expansive First on 7th Square, where diners will have the opportunity to enjoy meals and cocktails in a shaded outdoor space amid a triad of Modernist sculptures by famous designer Isamu Noguchi. The works have graced the square since the building opened 60 years ago.

Like the redevelopment of First on 7e As the retail business grew and flourished, Jones continued talks with the Darden family of Fort Worth, whose businesses own and operate the property. After what Jones described as “some really great conversations with Glenn Darden” and concept discussions with chef Blaine Staniford, the way forward has become clear. â€œFort Worth is my home and I look forward to creating a restaurant that Fort Worth patrons and others will also call home,â€ Jones said.

Valet parking will be available at the west entrance of the restaurant. Guests can also park in the adjacent garage. 61 Osteria plans to open in mid-2022.

First on 7e is a 21-story tower at 500 West 7e Street that features clean, geometric lines and sober decor emblematic of mid-century modern architecture. The building was designed by Skidmore, Owings & Merrill of New York and associate architect Preston M. Geren of Fort Worth.

A major update to the resort, led by Red Oak Realty, began in December 2018, with improvements such as new landscaping of the plaza on the south side, a remodel of the glass lobby to remove visual clutter and put highlighting the work of mid-20e artists of the century and the continued addition of street-level businesses including Neighbor’s House Grocery, Buon Giorno Coffeehouse and Guaranty Bank.

Can You File Bankruptcy on Student Loans?

Italian cuisine is the best in the world