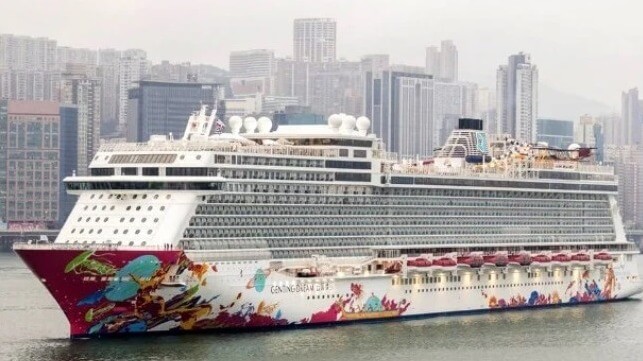 Genting Hong Kong today filed for interim liquidation of the company after reporting that it had exhausted its negotiations and no longer had access to cash. The company said it expects its cash balances to “run out” by the end of January and is taking these steps to protect against potential defaults and creditor claims.

“As the company and the group do not have access to any other liquidity under the group’s debt documents”, Genting Hong Kong informed shareholders that “the board of directors considers that the company will be unable to pay its debts as they fall due. This includes ongoing operational expenses and potentially required payments of certain debts that are expected to be due this month.

Earlier in the day, Tan Sri Lim Kok Thay, Chairman and CEO, announced that the filing was imminent to maximize the chances of a successful financial restructuring and provide for a moratorium on claims while seeking to avoid a liquidation. disorderly conduct of the company by one of its creditors. They also reported that all of the company’s independent directors had resigned and requested a suspension of trading in its shares.

The filing in the Supreme Court of Bermuda, where Genting Hong Kong is incorporated, calls for the “liquidation of the company”. At a hearing scheduled for January 20, they are asking the court to approve the appointment of provisional liquidators who will be responsible for developing and proposing any proposal to restructure the company’s debts and liabilities. Management is asking to retain their positions for day-to-day operations saying that “certain group business activities including but not limited to cruise line operations by Dream Cruises Holding Limited will continue….however , it is expected that the majority of the group’s existing operations will cease to operate.” Genting Hong Kong is the parent company of US-based Crystal Cruises as well as Asia-headquartered Dream Cruises and Star Cruises.

Genting Hong Kong’s recent financial troubles began in 2020 when the pandemic forced the suspension of global cruise operations and subsequently led to work being halted at MV Werften. The company was able to restart Dream Cruises in Asia in 2020 and 2021 and Crystal in mid-2021. The German state has provided bridging loans to resume work on the shipyard and an agreement was announced in June 2021 for a larger bailout loan from Germany’s Federal Economic Stabilization Fund (FSM). The fund required a 20% stake from Genting and at the end of 2021 new negotiations on the package after a report indicated Genting’s declining financial strength and potential inability to repay loans.

A German court yesterday denied efforts by Genting Hong Kong to force the release of funds from a ‘guarantee loan’ set up in a deal last summer with the state of Mecklenburg-Western Pomerania where the shipyard MV Werften of the company had its headquarters. The company also attempted to access funds held in reserve and a staged payment related to the construction of the Global Dream cruise ship in Germany.

Genting Hong Kong last week warned after the filing of the German shipyards insolvency petition that it could in turn trigger a cross-default under certain financing agreements for its debts totaling around $2.777 billion. .

The company got its start in the cruise industry in the early 1990s by establishing Hong Kong-based Star Cruises. Despite several missteps and frequent changes in operations, Star was considered a leader in developing the modern cruise industry in Asia. Star surprised the cruise industry in 1999 with an ultimately successful bid to buy US-based Norwegian Cruise Line. Using a new approach to cruising similar to resort hotels, Star successfully helped revive the faltering Norwegian. Star sold its investments in Norwegian after the company’s IPO, acquiring Crystal Cruises in 2015, starting MV Werften in 2016 and launching the premium cruise brand Dream Cruises in 2016.