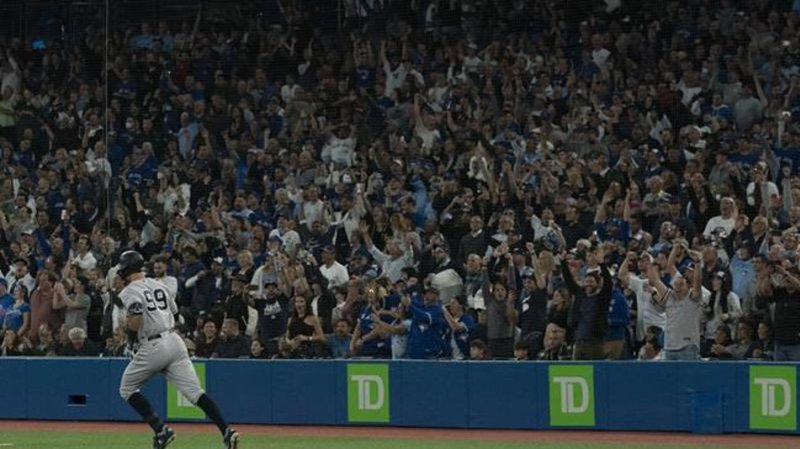 “That’s the most messages and people texting and calling me, more (messages) than I’ve ever received,” Lasagna said. “More than my wedding day, the birth of my children. It’s been wild for me.

Lasagna, 37, did a flurry of interviews with radio and TV stations on Thursday morning and had more booked for later in the day, he said.

Judge tied a long-standing American League single-season record with his home run in New York’s 8-3 victory over the Toronto Blue Jays. Lasagna was one of the few spectators in the front row of the 100 level of the stadium who had the chance to grab the precious baseball.

The ball hit the wall just below them and bounced into the Toronto bullpen and was then handed to the judge.

The story of the near-take, coupled with Lasagna’s unusual last name and the fact that he owns an Italian restaurant, set the baseball social media world ablaze.

” It was great. I love the chirps, I love the funny comments,” he said. “I have a lot of humor in me, so I love seeing them.”

He described the past 24 hours as a whirlwind.

“Hearing them say my name is always cool. I’m sure it puts a smile on my parents’ faces.

Phil and Cathy Lasagna still help out at the family restaurant in the west end of town while their son Frankie takes care of day-to-day operations. The surname is a regular topic of conversation with customers.

“Almost every other day someone will come into the restaurant, read the (family) story on the menu, see my last name and not believe it,” Frankie said. “It makes a good topic of conversation.”

And then there is the Terrazza restaurant menu. It has a wide variety of Italian dishes that you would expect, but surprisingly no lasagna.

Lasagna said he hated the dish growing up and still doesn’t like it to this day.

“The hard noodle on top never appealed to me sometimes,” he said. “And if your last name is Lasagna, you must have awesome lasagna on your menu. You can’t settle for mediocre lasagna.

“I don’t have this recipe, so no lasagna on the menu.”

This report from The Canadian Press was first published on September 29, 2022.